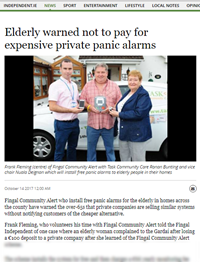 Fingal Community Alert who install free panic alarms for the elderly in homes across the county, has warned that companies may be selling panic alarm systems without notifying customers of the cheaper alternative. The Fingal Independent has learned of one case in which an elderly woman complained to the Gardaí after handing over €100 to a company.