In early January 2013, the Government made a decision to cut spending on the Seniors Alert Scheme, which provided funding for personal security alarms for older people. The original decision to cut the funding met a storm of protest after it was communicated to voluntary organisations that administered the scheme.

Within six months the government had announced the transfer of the Seniors Alert Scheme to Pobal.  [See also our Pobal page].

Before the transfer to Pobal, the choice of alarm supplier was left with community groups and older people, who were required to get quotations from suppliers.

In early January 2013, the Government’s original decision to cut Seniors Alert Scheme funding met a storm of protest after it was communicated to voluntary organisations that administered the scheme. This led to the government reversing the controversial decision. Within six months the Seniors Alert Scheme had been transferred to Pobal.

When Pobal took over the scheme, the choice of alarm supplier was centralised and restricted. For instance, under the current scheme, only one monitored alarm supplier is currently authorised (in 2019) to operate in each geographic area (‘lot’). There are a total of seven lots covering the 26 counties.

Many parliamentary questions were tabled in Dáil Éireann about the transfer. For instance Deputy Brendan Ryan stated,

We need to protect these people and ensure that the quality of service and after care for the telecare systems are not compromised.

Other Deputies such as Deputy Michael Moynihan of Fianna Fáil, Deputy Tony McLoughlin of Fine Gael and also Deputy Michael Creed have received similar communications and share our concerns. This is a genuine cross-party call to the Department and to the Minister of State. We all share the concerns of the community groups that are dealing with this on the ground. They are the experts and they feel they have not been consulted properly. Efforts need to be made to facilitate real consultation on this matter in order, perhaps, to amend the terms of the tender to protect what is good and what works in the current scheme.

The big question is, what is the objective of the change? What is it supposed to achieve? The scheme works well as it is and the customers are very happy. What problem is the Department trying to solve?”

“What problem is the Department trying to solve?”

Our Sponsor TASK, in a meeting with Alan Kelly on 10th December 2014, also highlighted serious concerns about the scheme’s transfer to Pobal without consultation with community groups and suppliers. 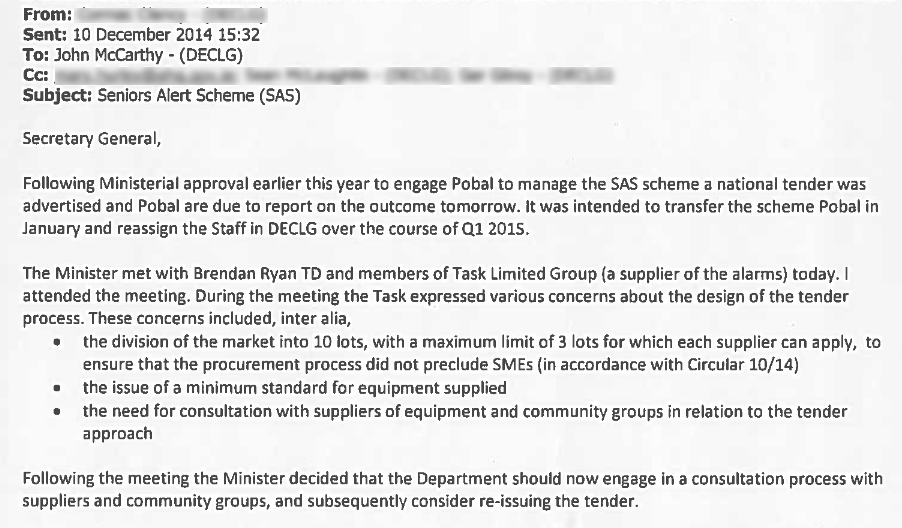 According to official departmental documents which were subsequently obtained under Freedom of Information, following the meeting with TASK, the Minister decided that “the Department should now engage in a consultation process with suppliers and community groups, and subsequently consider re-issuing the tender”.

However, no such consultation with suppliers and community groups apparently ever took place, and the Seniors Alert Scheme tender began operating in 2015 as a framework contract. It continued for less than 12 months, before Pobal sent notice of its early termination to suppliers. The reason for the early termination, of what was originally advertised as a three year contract, has apparently never been publicly disclosed.

Pobal appeared before the Joint Oireachtas Committee on Rural and Community Development Committee to discuss Pobal’s operations on 30 January 2018. The committee meeting including Seniors Alert Scheme discussions can be viewed in full and a link is provided at the end our Pobal page.