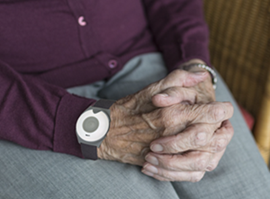 Since the launch of the new Seniors Alert Scheme, there has been a fourfold surge in demand for senior citizens’ personal alarms, according to reports in today’s Independent.ie.

This is a dramatic turnaround, given the under-spend in previous years of the Seniors Alert Scheme budget, most markedly since the scheme’s transfer to Pobal in 2014.

Already, under the new scheme, over 2,600 people have had applications for monitored alarms approved. This is since it was launched on 19 Oct 2017, by Minister for Rural & Community Development, Michael Ring.

The dramatic rise in applications, has resulted in Minister Ring announcing an additional €400,000 to the scheme’s budget for this year.

Since relaunching the Seniors Alert Scheme in October, the requirement for a person to be living alone in order to avail of the personal alarm grant funding was removed. Another change was that a years free 24 hour monitoring was included under the new scheme.

To find out more about the Seniors Alert Scheme you can contact our Sponsor, TASK Community Care who is an approved supplier under the government grant scheme for monitored alarms.

The Independent – Rise in demand for personal alarms as eligibility
widened